Alt.Oscar: Where YOU are the celebrity

SANTA DOES NOT TALK TO THE PRESS! 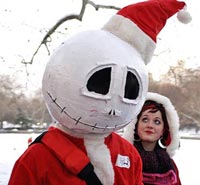 Or so Santa says…

In 2005, lots of press were talking to, videotaping and, in general, stalking Santa in NYC and other cities around the world. This year "Santacon" was profiled in an oft-recurring Bravo Network special, a New York Post feature article, several cable news shows and on the morning-show mecca, the NBC Today Show.

Santa was out of the closet whether Santa liked it or not. 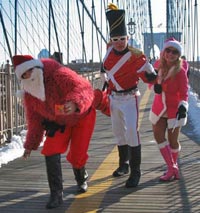 Santacon was launched in San Francisco some umpteen years ago by folks from an underground prankster organization called the Cacophony Society. Since then it has been grown, copied and co-opted by many others all over the world while Cacophony stayed underground.

Stating "you might already be a member", Cacophony's website describes a national network of lodges (cells?), all intent on artistic, often insane, spoofings of this and that. Besides Santacon, Cacophony was a big force behind Burning Man's growth, created the Alaskan dogsled spoof, "Idiotarod" and numerous other events. Cacophony never takes credit preferring to organize covertly, stir things up and 'get out of dodge' before authorities arrive. 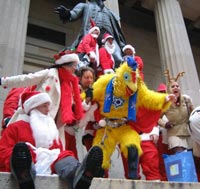 As the word 'cacophony' implies, Santacon's growth is due to thousands of discordant souls all pursuing random silliness. Around the world, the media cites some who say that they are protesting over-commercialization, others who want to create chaos with a well-disguised posse and others who doggedly stick to the talking points: 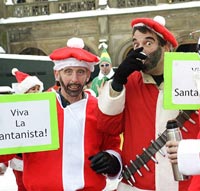 Most such cons involve bar- and landmark-hopping, joke-gifting, random theatrics, creative costuming and many new best friends who may or may not remember you the next day. Aside from the obvious "don't mess with cops, don't mess with kids" exceptions, there are no rules or valid rulemakers - It is santa anarchy for those who participate.

As for Santa 'not talking to the press', Cacophony's "primer" says:

… Especially lie to the media. They'll be grateful for the more colorful copy. Yes, yes, yes, we all know the media "co-opts" underground culture, but that's hardly a reason to shun it. Make the media your play partner. Chances are your 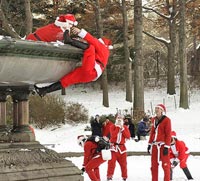 "underground" interests were at some point nurtured by one of those media mongers who makes a living by spilling the underground beans. It would be uncharitable to keep the fun of Cacophony to yourself once you're "inside". Share with the media, lie, contribute your myth-making skills to our culture...

Whatever the tradition, mea culpa… I was one of the two spokesantas who appeared on the Bravo TV special.

Taped in July, "Great Things about the Holidays" counted down 100 memorable or quirky things that go on this time of year. Santacon was on the menu one way or other and neither talking-head santa was planning to give too much away. 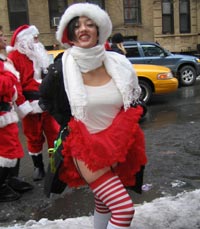 As "Santa Bligh", a 'cynical pirate santa', I spent much of my interview arggghhhing and weaving tall santa tales. Ultimately the final three minute piece featured 2003 santacon footage and several unrevealing quotes from us.

Regardless, feathers were ruffled…

With NYC's Santacon being HUGE this year, (doubling from last year to ~1000 santas), it is possible that the media coverage added to our growth. But is growth a bad thing? Is evolution coming regardless? What can really be done?

The debate raged with only a few things being resolved: No one santa speaks for Santa, 'No spectators allowed' (the uncostumed NBC camera crew was pelted with snowballs) and 'Santa is as Santa does' (whatever that means).

As for this year's event, many say it was the best ever… Yes, the huge NYC horde was too large for any single bar but the massive spectacle and fresh new faces was a sight to behold. As the night rolled on it was most delightful seeing the many newbies drinking the koolaid. Santaddiction.

The Hanukah Chicken horah'd with Hanukah Harry, the Santanistas toasted la Liberación and Homeless Santa sought booze and public toilets. Other favorites were Santa Jack from Nightmare Before Christmas, the Santas from OZ and Santa's Sack.

At the South Street Seaport, the steps of the Federal Building and especially in Central Park, the massive red sea blew us and everyone we encountered away. Kids loved us, the cops smiled in disbelief, bar owners counted the cash and tourists snapped many o' pics.

Love-love-win-win. NYC was a better place for these santas coming to town. 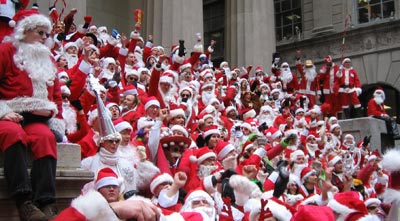 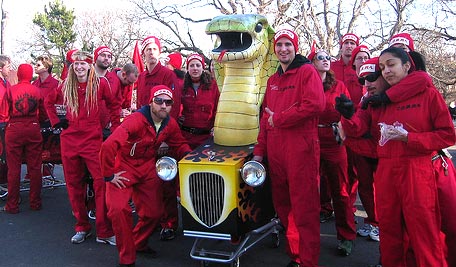 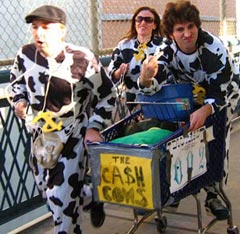 The annual Alaskan dogsled race spoof, the Idiotarod, was upon us and, like Santacon the month before, "underground" was not so underground anymore.

The morning began with frenzied alarm. The starting point had changed! With sabotage encouraged no one was sure if this was true or a ploy. Phone calls were made, cryptic responses were given and the game had begun. Were the event organizers trying to misdirect the cops or had this confusion been planned all along?

Ultimately we all found our way to the new location in a Brooklyn park and, as start time neared, it seemed that this years event had grown significantly over last years. 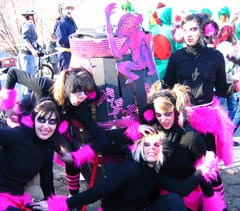 With Indian summer in full bloom, hundreds surged towards the starting line, (which was, oddly, at the top of a steep set of stairs) and the race began. With a bang this wild army of farcically themed groups scrambled down the stairs.

There were the world-famous C.O.B.R.A. TEAM, the Ca$h Cows and most sexy Barrel Full of Monkeys. The Super Heroes were battling hard with team "Shebrew" and the "Hung Horses". Animal Crackers were doing their best to keep up.

Kostume Kult's entry, "The Running of the Idiotabulls" had 3 pillow-headed bulls that were engineered to ram into other carts... And they did.

Snaking from the Carrol Gardens to Dumbo over the Manhattan Bridge and into Manhattan, it was soon obvious who the athletes were and their teams surged ahead. Pushing, posturing and screaming, this monstrous horde was too big to be missed and was soon to be followed by a police escort who would tag along all day. 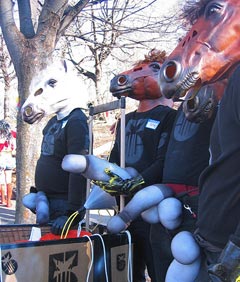 The winners of the race was an overly serious group whom we never got close enough to know but, by far, the "best in show" was C.O.B.R.A. whose classic, fire-spitting wooden cobra-car was probably one of the coolest shopping cart art pieces ever assembled.

Kostume Kult's Idiotabulls came in second with an honorable mention about the faux-bull poop that was strewn in their wake as were many others who brought unbelievable inspiration out on this wild day. Another favorite was the shopping-cart liquor bar with friendly wait-staff.

Ultimately, the event ended at East River park where dancing and police scrutiny went on til darkness. Unlike 2005, when a pyramid of shopping carts was abandoned in Tompkins Square Park, this year, the idiota-cleanup was much more organized and, it seems, the show will continue next year. 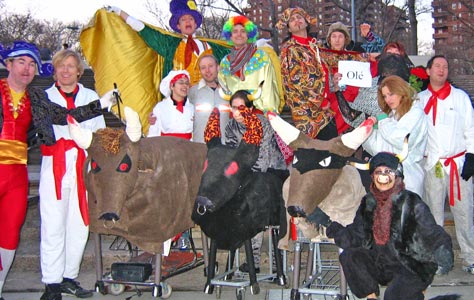 Alt.Oscar... A NYC Alternative to Hollywood 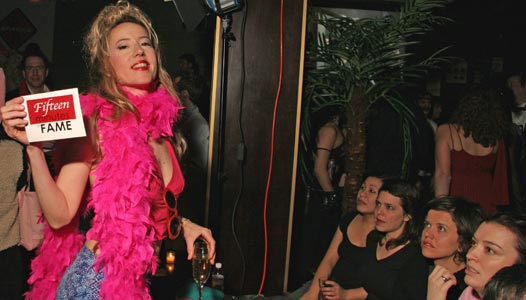 When planning this event, it was curious to think how NYC should answer Hollywood's big night… 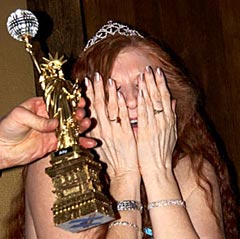 Do we care about Oscar?... Yes. Whether it was about the films, the fashions or the pop-culture hype many in NY get caught up in variations of Oscar Fever.

Are we impressed with Celebrity? Perhaps, but probably less so than in most cities. 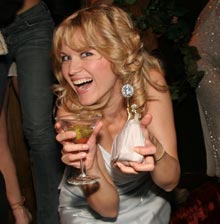 Do we really want to watch the broadcast? Some do , some couldn't care less…

Thus, the Alt.Oscar was born. In NY's melting pot this event was to bring together fashion world folks, underground hipsters, random unique characters and a bunch of people without TV's.

Here, it was proclaimed, "celebrity" is not about what others say, but what YOU say (dammit!). The Alt.RedCarpet was for anyone who made an effort. Part fashion event, part theater some seriousness, mostly farce- New York was about to make it's own statement.

The first fundraiser for the newly launched arts charity, Costume Cultural Society, the Alt.Oscar rolled out its own fabulous red carpet (donated by non-profit, Materials for the Arts) at Embassy, an umarked hip Manhattan lounge club. 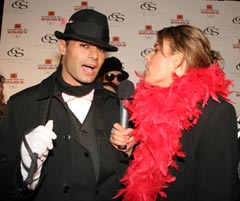 With all the elegant people posing in front of the traditionl logo-board, with interviews reported by European VJ Deborah Durrfeld, the night had begun. Several Alt.Celebs made appearances including a martini-gulping Jessica Simpson, a baby-dropping Britney Spears, a busting-out Janet Jackson and a parade of other stylish and ridiculous stars.

Event hosts Baby Chic and Zoolander's Mugatu (aka Jewgatu) greeted their guests and handed out Sparks alc/energy beverage which brought their prestigious branding (and cases of the jitter-causing drink) to the event. 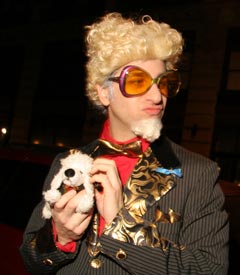 And the event was on.

Outside, the parade of stars went on and on while things heated up inside.

Toggling back-n-forth between the broadcast and hot dance music, DJ Douggie Styles, got people jumping while MC Christopher rolled out the program. Christopher rallied the crowd with dances, games and contests and the excitement grew.

With Hollywood's stars posturing a continent away, the action was here, and pretty soon only a few truly dedicated watchers (and those who bet on the Alt.Oscar Pool) seemed to care what was happening on the big TV screens.

It was time to unveil the soon-to-be-prestigious "Alty Awards"… On this special night Celebrity and Costumery were to be judged by a panel of accredited judges with four grand prizes and ten "Alty Junior" awards for lesser stardom and feats of brilliance. Judging the participants on overall fabulousness, attitude, the extent of their lobbying and under-the-table bribery, a few commented how this awards night was most similar to that other one… 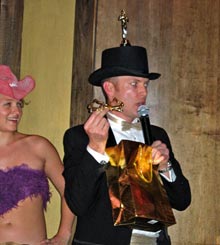 But this one was WAY MORE FUN! and somewhere in the night - all hell broke loose.

With uber-celebrity SuzQ sporting the largest, rose-pedal scattering entourage, she was a shoe-in for Best Celebrity and her alligator tears were a high-point of the night. March of the Penguins one a Costume award as did the lighted costume designer Britelite. 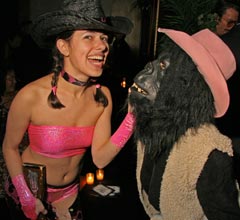 Soon after these "serious" awards, the dance-offs began and the spectacle reached a fever pitch… Gay cowgirls wrangled Queen Kong while Transamericans pouted and posed. When the guys took the stage, the Oscar awards seemed like a distant memory.

Who won best picture, by the way?

The Alt.Oscar is here to stay and will be bigger next year. 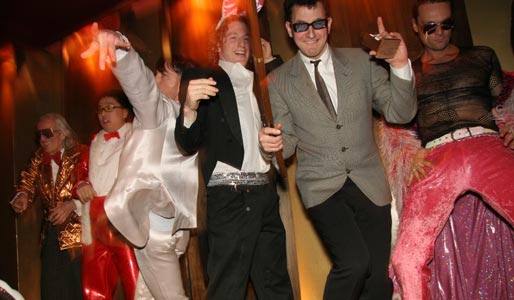