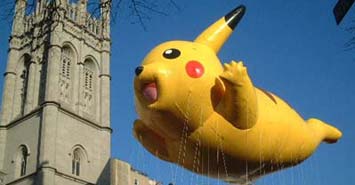 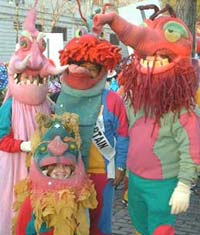 The balloons were inflated, hundreds of costumers poured forth from the subways and the men in blue were out in force. It was time for the 2001 Macy's Thanksgiving Day Parade.

In line with the new reality, security was tight. Special gauntlets had been set up to check all spectators. Back-packs were forbidden and folks were instructed to arrive very early.

Armed with blankets, warm beverages and a passion for this annual rite, spectators were lining up as early as 6am to secure valuable positioning on the grandstands. 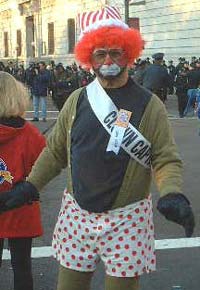 After a thorough frisking and some fancy footwork, the Costume Network photographer did manage to circulate around the staging area and interview the many early-bird costumers. While the signature attraction of the parade is the balloons, some interesting self expression and infectious enthusiasm could be found amongst this inspired group.

As every year, the parade mixed balloons with floats and multiple assortments of clowns, marching bands, cheerleaders and random themed costumers. New balloons included Curios George and Pokemon's Picachu and the parade was lead by a Statue of Liberty Float. Sir Rudy Guiliani made an appearance flanked by Yankee coach Joe Torre and other notable's. 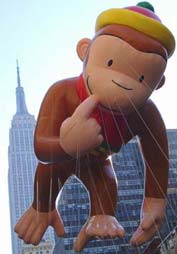 The most poignant moment was the NYPD officers who marched holding two large American flags symbolizing the lost Towers. The most humorous moments were the rousing applause given to the horse manure attendees following the horses with garbage cans and shovels.

This event is a New York institution. With 2.5 million in attendance despite all, it seemed that the black cloud that had been hovering over the city is passing. On this picture perfect fall day, the parade was a success. 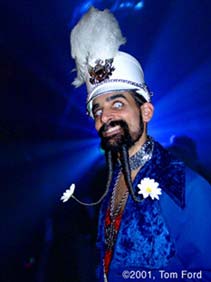 Sparks were flying at the NY Burning Man Decompression Party in Dumbo, Brooklyn.

The annual Burning Man event that takes place every summer in the desert outside Reno, Nevada is a growing phenomenon where people build a temporary city and interact in a liberating, commerce-free environment while exploring radical creativity and self-reliance. In fact, the Burning Man faithful love the event so much, that many participate in "decompression" parties afterwards to dull the blow of returning to ordinary, mundane existence. Named from the deep-sea diving term for when divers must de-compress after a dive or get the bends, these parties allow "Burners" to relive their beloved desert experiences before hunkering down for the winter months. 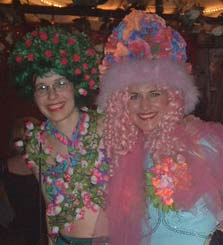 Most established in its birthplace on the west coast, the Bay Area decompression parties have been going on for years. There, the Burner culture is large and well organized. In NYC, this Decom, attended by 1,200+ folks, officially marked the coming-of-age of the New York Burner community.

This party was AWESOME!!!

Organized by SEAL, the non-profit "Society for Experimental Arts & Learning", Burners from New York and select Eastern points banded together to create a little piece of the playa in a large, empty loft space on the East River under the Manhattan Bridge in the Dumbo section of Brooklyn. 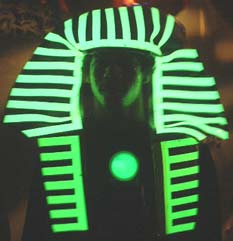 As is true at Burning Man's Black Rock City, this barren space was transformed into a vibrant environment of interactive art, cool "chill spaces" and many multi-sensory curiosities. Just like Burning Man, all of the time, effort and inspiration were donated by talented, hard working individuals who do this for the cause of creativity and community.

Emerging from the large, industrial elevator, the partygoers' senses were immediately assaulted by a potpourri of spectacles and strange goings-on. Throughout this spacious, high-ceilinged space, the playa was reincarnated with numerous art installations, theme camp-like comfort zones and hundreds of delightful souls displaying their own sense of fashion and humor. 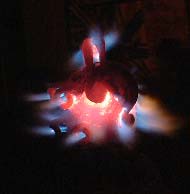 Most cool were Disorient's transparent plastic domed room that throbbed with colors and lights, the large inflatable sea anemone which hung from the ceiling, the cast iron, fire-art "flower garden" and "burning heart", Anney Fresh's inflato-dice room, the mace, the flowered merry-go-round and the video screens displaying spinning psychedelic images.

Throughout the night, there were staged and spontaneous performances. The Flag Dancers and Fashion Show were crowd favorites along with the Hungry March Band's set. In fact, HMB aptly embodies the spirit of Burning Man because they are an interactive, group experience who play amongst the crowd (not on stage) and invite all to groove, stomp, drum and dance along. Fire spinners spun all night and random theatrics were everywhere. 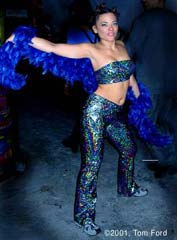 The costume themes were numerous and varied. With a rich array of colors and craziness, the burner crowd is second to none when it comes to style, individual expression, bawdiness and sheer "how the fuck did you thing of that!" creativity. Special mentions go to the folks we call the Fluorescent Pharaoh, the Capitalist Devil, Skeeter Dude, Hornosaur, Multi-Personality Guy, Crazy Beard and Flower Angels.

The party seemed to groove along in a timeless way. Folks continued to dance and socialize with no regard for the early hours. After 4:30 some real celestial sparks flew as the Burners were treated to the Leonid meteor storm. As I watched the many shooting stars, I realized that the last time I looked to the sky with such wonder was on the night of "the burn" when the full moon watched over the climactic night of the Burning Man festival. 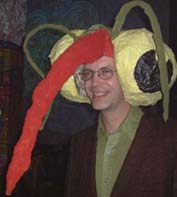 But that wasn't all

On this magical night when much that had recently befallen NYC had been forgotten, the sunrise was a blessed event that brought elation to those lucky enough to still be standing. As the sun streamed through the windows it lit up the many art pieces and then flashed across the river to illuminate the still beautiful skyline of lower Manhattan. From the picture windows overlooking the river, the remaining Burners saw that there is still profound beauty in this bruised place and that the future holds the promise of many better days.

Burners will do their part to make it so.

For more info, check out the Burning Man and SEAL sites 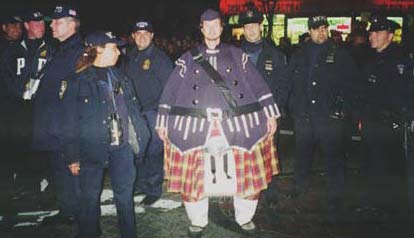 It was the spookiest Halloween ever

Under its first full moon in 46 years, All Hallow's Eve was an oddly surreal night in Manhattan. With smoke still rising from its southern tip and an acrid smell accenting this drizzly, dreary night, the city was in a virtual lock-down due to ominous rumors and threats. But in this tough and resilient town, thousands of hardy souls would not be deterred from participating in their beloved annual rite. 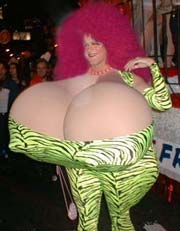 Whether it was motivated by patriotism, escapism or rebellion, New York's most creative braved the night for theme parties, special performances and, of course, the infamous Greenwich Village Halloween Parade.

Themed "Rebirth", a large Phoenix puppet lead the parade up Sixth Avenue, through Greenwich Village and into Chelsea. In its wake were hundreds of costumers, musicians, dancers, puppeteers and floats. While there was much that was inspiring and fresh, few could ignore the absence of the twin sentinels who once stood guard over this wonderful event. On this night when the veil between the living and the dead is supposedly at its thinnest, something was amiss. What that was, is anybody's guess. 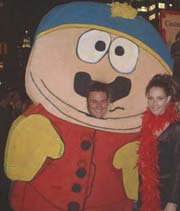 As usual, the parade marchers gathered in Soho for several hours of preparation and posing while waiting for the show to roll. There were definitely less people this year but those present exhibited an extra flair befitting spirited folk out on such a night. Cops were everywhere but this time as allies. Flags were in, anti-Guliani stuff was out. Creativity, style and New York's unique sense of humor ruled.

Costume Network had its annual float and pumped awesome tunes to the delight of the crowd and dozens of costumed dancers. Around it streamed some of this world's most inspired folk. Special homage is paid to the large, foam, South Park character, Eric Cartman, Austin Powers' "Fat Bastard", Sponge Bob Square Pants, the Torah-Cordionist and someone we called "Monster Boobs" (see photogallery). 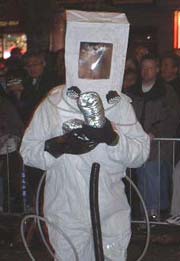 Pointed political statements were made by George W. and his Blind Sheep and a large skeletons-in-the-closet float entitled "US Foreign Policy". There were several who mocked Osama Bin Laden, a group of Hazardous Mail and an Anthrax Removal Man. To the delight and horror of the crowd, the Anthrax Removal Man was crisscrossing the parade in a self-made biohazard suit "purifying" the crowd and police using a comical vacuum device.

After the Parade, there were dozens of parties and the usual street scene in the West Village where no international threat could deter the customary prancing and partying. It was a long night of celebration and camaraderie. Despite all the doom and gloom, it turned out to be an amazing night. 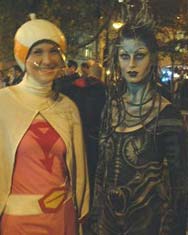 The mystique of All Hallows' Eve lives on.

For many more pics go to the gallery's Halloween-NYC section.